With the growth of the profession, it was felt that JAMBAR needed a permanent home from which administrative and operational affairs could be conducted. In 1989 JAMBAR Holdings Limited was incorporated, with its main object being the acquisition, development, maintenance and management of property at 78 Harbour Street, Kingston. While JAMBAR Holdings Limited is a distinct legal entity from JAMBAR, the property acquired by that company serves as the home for JAMBAR, the General Legal Council, and other entities.

II.         Protecting Fundamental Rights and Principles Necessary to Uphold the Proper Practice of Law as Illustrated Below.

III.       Commenting and Acting on Important Legal/National Issues to the Public

Through various media releases and interviews, JAMBAR has sought to deal with various issues that impact the Jamaican society and our system of justice.  Below are just a few of the media reports and statements issued by, or on behalf of JAMBAR pertaining to various issues of national importance.

[Extract from a public service advertisement published by the Jamaican Bar Association (et. al)   in (The Gleaner on May 30, 1974)].

[Extract from a statement of the Jamaican Bar Association (The Gleaner, November 29, 1978)].

[Extract from a statement of the Jamaican Bar Association (The Gleaner, July 6, 1979)].

[Extract from a statement of the Jamaican Bar Association (The Gleaner on March 13, 1986)].

[Extract from a statement by the Jamaican Bar Association(The Gleaner, April 11, 1986)].

[Ian Wilkinson, QC, Oct, 2012(in the same speech he proposed a five-year plan for the justice system including allocation of an additional J$5-6 billion for justice issues)].

For over 20 years JAMBAR has hosted hundreds of seminars and presentations on various matters germane to the legal profession and the practice of law. These seminars range from two hours in Kingston to weekends on the north coast, and workshops. With the advent of compulsory CLPD in 2013 JAMBAR has an important role to play in ensuring that our members are given the opportunity to attend seminars hosted by JAMBAR to assist in their satisfying the requirements of CLPD and, more important, in enriching their legal practices and pedagogy. 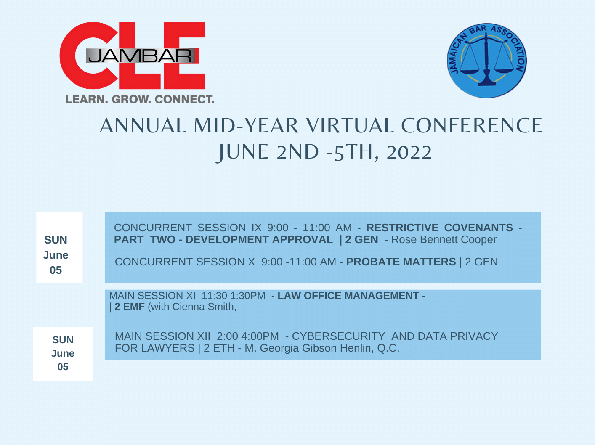